Profile of the Chairperson 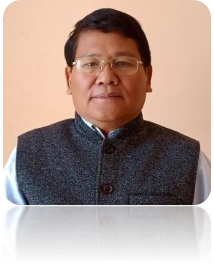 Pu C. Lalsawta, IAS (Retd), our first Hon’ble Chairperson hails from a humble family of Reiek village. His parents- Pu C. Ngama, who studied upto Lower Primary (Class II) and Pi Laithangpuii, who had no formal education but taught herself reading the scriptures in her middle age, were simple, self-respecting and hard-working cultivators. Their children also used to help them in their jhum cultivation. Their house and entire earthly possessions were burnt down in the aftermath of the great 1966 Mizoram upheaval.

Pu Sawta studied in the Village Primary and Middle Schools and also in the newly established community High School where he combined study with working in the family jhum cultivation and as a daily waged labourer earning his school fees. After passing Class VIII, he interrupted his studies in 1970 and worked as full-time labourer. After a year, his elder brother got him admitted in the RK Mission School in Cherrapunjee from where he matriculated in 1973. When his elder brother who was supporting him joined the IPS and then the IAS as probationer, he had to combine day-time work and night-time studies to support himself and his younger sister (now a Sr. Professor in a University) and younger brother (now a State Chief Secretary). He completed PUC from evening section of St. Edmund’s and Graduation from evening section of St. Anthony’s College, Shillong. Soon after graduation, Pu Sawta appeared for the Civil Services Examination and in his first attempt, was selected for Central Service viz IA&AS in 1979 and in his subsequent attempt he got selected for the All India Service viz IAS in 1981.

During his 36 years’ service in the IA&AS and the IAS, Pu Sawta held several posts starting from Asstt. Accountant General/ Asstt. Commissioner culminating to Principal Secretary/ Vigilance Commissioner in the rank and grade of State Chief Secretary/ Secretary to GOI and gaining useful experiences in various fields such as finance & accounts, banking, law, management, public administration, anti-corruption measures and vigilance.

While serving in the IA & AS, Pu Sawta completed Institutional Training Course in IA&AS Staff College (now IA&AS Academy) Shimla and also worked as Assistant Accountant General in Shillong. Ever since his  training in the IA&AS Staff College, Shimla, his guiding principle has been the canon/ standard of financial propriety that “every Government servant should exercise the same vigilance in respect of expenditure incurred from public moneys as a person of ordinary prudence would exercise in respect of the expenditure of his own money”. His exposure to the IA&AS, his experiences as HOD under DFR, his trainings in Financial Managements and experience as Principal Secretary of Finance Department imbibe in him the importance of effective spending and proper accounting of expenditures.

As Deputy Development Commissioner, he coordinated with scheduled Banks in financing Government priority sector schemes. He also functions as Administrator of District Central Cooperative Bank, and later as Director in the Board of Regional Rural Bank which gave him some idea about Banking. His experience as Managing Director of Industrial Area Development Agency and courses in Management principles taught him the techniques of Management.

During his long career, Pu Sawta was given such assignments (as DC & District Magistrate, Cane Commissioner, and Divisional Commissioner etc.)  which required him to exercise statutory powers independently and pass orders in quasi-judicial proceedings. As Commissioner of various Divisions for more than 10 years, he supervised the magistracy and policing, controlling the DMs and SPs through the DIGs etc. He presided over Appellate Courts and Revision Courts in Revenue and Criminal cases and also had to decide disciplinary cases in Departmental Proceedings etc. He also supervised and coordinated the Regional Heads of Development and Regulatory Departments within the territorial jurisdictions. He also functioned as Chairman of Managing Board of various Medical and Engineering Colleges and of various statutory bodies and also as Vice Chancellor of 2 Universities.

As Principal Secretary and Chief of Vigilance Organization in Bihar, he supervised and guided Agencies under him such as (1) Vigilance Investigation Bureau headed by Director General/ADG, (2) Special Vigilance Unit headed by Inspector General, and (3) Technical Evaluation Cell headed by the E-in-C. He also had to monitor the functioning of Chief Vigilance Officers of all the Departments and Vigilance Flying Squads of all the 37 Districts. He also had monthly review of the progress of Departmental Proceedings with the Chief Secretary.

He also had to review the performance of Special Public Prosecutors and monitor the progress of prosecution cases filed in different Vigilance & Special Courts. In course of implementing Prevention of Corruption Act and Special Courts Act, he had to pass orders for confiscation of illegally acquired properties and coordinated prosecutions. He however took care that honest public servants and dynamic officers who took bold decisions in good faith are not harassed unnecessarily or prosecuted without evidence of criminal misconduct even if the decisions may later turn out to be wrong decisions.

During his service in Bihar/Jharkhand/Mizoram, he acquired a reputation for honesty, sincerity and probity in public life. He is a stickler to rules and regulations and always tries to adhere to norms. He is a strong believer in the Principle of Natural Justice and Fair Play.  After his retirement, the Bihar Government also appointed him as Administrative Member of the Appellate Tribunal for the Real Estate Regulatory Authority, which he however declined to take up.